Little Caesars is one of the largest pizza restaurant chains in the world, with headquarters in Detroit, MI. Its formal name is Little Caesar Enterprises Inc., and it was established in 1959, at around the same time as many of its competitors. The founding couple, Mike and Marian Ilitch, opened a small pizza joint in Garden City, MI under the name Little Caesar’s Pizza Treat.

Did you know that the first restaurant remained open until recently when it closed up shop in 2018? One may have shut down, but over 5000 locations still remain open! Little Caesars is best known for offering its pizzas at lower prices than its competitors. Remember their famous tagline, “Pizza! Pizza!”, implying that it sells two pizzas for the price of one?

Since Little Caesars offers pizzas for prices much lower than its competitors, you may wonder how it turns up a profit. And indeed, it does profit a lot, what with its total revenue of more than $8 billion and total sales of around half that amount. The business model of Little Caesars is almost the same as that of its competitors. It prepares pizzas and other food items in its restaurant and sells those to its customers. It also opens franchises of its brand on a global scale.

Little Caesars is primarily a pizzeria that also offers other kinds of fast food items in the restaurant industry. Unlike other pizza restaurants that are heavily dependent on deliveries for generating profits, Little Caesars focuses its services on the dine-in option, providing excellent rates and deals on their items for customers. But it is not known to compromise on the quality of its pizzas while offering amazingly low prices.

Did you know that Little Caesars is the third-largest pizza restaurant chain in the world, not too far behind Pizza Hut and Domino’s? Coupled with the comparatively low prices of its products along with its lip-smacking pizzas, customers tend to line up at its outlets every single day. But we understand if you still want to switch to another restaurant, maybe try out their offerings.

Domino’s is, officially, the largest pizza restaurant chain in the world. Founded a year after Little Caesars, in 1960, it has been fiercely competing with the latter since its inception. It was established by brothers Tom and James Monaghan, along with their friend and investor, Dominick DeVarti (from whence came the name of the brand). While pizza is the primary offering of Domino’s, the rest of its menu usually differs from region to region.

Domino’s Pizza may have started off small with a store in Ypsilanti, MI, but it has spread to almost every part of the planet today. With close to 19,000 outlets in more than 80 different countries, it is indeed a giant in the pizzeria industry. Did you know that a maximum number of its outlets are located in the US, closely followed by India and the UK? Another interesting fact to note is its net income which exceeds $500 million!

Pizza Hut is, officially, the world’s oldest pizza restaurant chain, and that’s excluding any local pizzerias. It was established a year before the foundation of Little Caesars, in 1958. Two brothers, Dan and Frank Carney, started the first Pizza Hut outlet in Wichita, KS. Today, that very restaurant has been converted into a museum charting the intriguing history of the brand. Its iconic hut-shaped outlets began around five years after its inception, in 1963.

Pizza Hut may not be the first in the restaurant industry, but it is definitely the first in the fast food pizza restaurant chain industry. However, the first doesn’t always retain its rank, and Pizza Hut currently comes second to Domino’s, just ahead of Little Caesars, and it is presently owned by Yum! Brands. It has more than 18,000 outlets all over the world, and it serves food items similar to that of its competitors.

Papa John’s International, simply called Papa Johns, may have started out relatively late, in 1984, but it has managed to become the fourth-largest pizza restaurant chain in the world today. The brand had its beginnings in a small closet behind John Schnatter’s father’s tavern. The climb from a single small room to over 500 outlets was realized in just about 10 years, and it took the company no more than five years to open a thousand more restaurants.

Over the years, the progress of Papa John’s expansion was relatively slow, but it has managed to open nearly 6000 outlets all over the world. Most of those are located in the US but ask any pizza lover anywhere on the globe about their favorite pizzeria. Many of them will answer Papa John’s! The prices of their pizzas may be higher than those of Little Caesars, but they still retain the authentic taste that escalated Papa John’s to international glory.

Marco’s Pizza is a chain of restaurants that primarily operates in the US. It also has a few locations in the Bahamas and India. Founded in 1978 by Pasquale Giammarco (from whence came the name), the company’s success is heavily dependent on its scrumptious sauce recipe used for preparing the pizzas. Marco’s Pizza wasn’t as popular in the ‘80s and ‘90s as it is today. It was only post the turn of the millennium that it started gaining the recognition it deserves.

Marco’s Pizza may have started off in the pizza industry, but its submarine sandwiches and chicken wings are also equally popular. Its reach may not stretch as far as that of Little Caesars, but wherever it is present, it has made a long-standing mark. The company is privately owned by Jack Butorac, the person who was responsible for the rapid growth of Marco’s Pizza in the 2000s.

Papa Murphy’s is a pizzeria known for its freshly baked pizzas, which you can take home and prepare yourself. Its business model is slightly different from that of Little Caesars, in the sense that it doesn’t sell cooked pizzas outright. It will give you pre-prepared ingredients, which you can use to cook the pizza at home at your leisure.

Papa Murphy’s entered the restaurant industry in 1995, but it didn’t emerge from scratch. It formed from the merger of Papa Aldo’s Pizza and Murphy’s Pizza, both take-and-bake pizzerias established in the early ‘80s. The former was the one to invent the concept. Today, Papa Murphy’s has more than 1500 outlets throughout the US, Canada, and the UAE.

There’s the more common and original Italian style pizza, and then there’s the rarer New York style pizza. Sbarro specializes in the latter. It doesn’t usually sell whole pizzas, serving slices instead. While its NY-style pizza remains its highlight all over the world, Sbarro also serves an array of other Italian-American food items.

Sbarro stepped into the food industry a few years before Little Caesars and Pizza Hut, in 1956. But back then, it was mainly a grocery store that also served Italian food items. Its pizza eventually became famous as it started expanding into other regions of NY. Today, Sbarro has over 600 locations worldwide, along with an ever-growing fan base.

Hungry Howie’s Pizza is a fast food restaurant chain not too different from Little Caesars. But it serves an additional signature food item called calzone-style submarine sandwiches. Nevertheless, its delectable pizzas remain its most popular food. Apart from subs and pizzas, you can also find wings, tenders, salads, and desserts at each of Hungry Howie’s outlets.

Hungry Howie’s has been in business in the restaurant industry since 1973, when James Hearn launched the first outlet in Taylor, MI. It was around 10 years later that it started franchising its brand. Did you know that it is currently the 11th largest pizzeria in the US, with more than 550 outlets in 22 states? Its flavored crust pizzas are exclusive to its name.

Pizza and entertainment in one place! Chuck E. Cheese is the perfect hangout for kids who love pizza. Did you know that the founder of Chuck E. Cheese, Nolan Bushnell, also co-founded Atari, the giant in kids gaming? Bushnell went with pizza as their playtime snack for the relatively low wait time and less chance of making a mess, and of course because most kids loved pizza.

Despite being one of the world’s biggest pizza chains, the most popular item at Chuck E. Cheese is their Dippin’ Dots, colorful tiny cream balls that every kid smacks their lips for! Chuck E. Cheese was all the rage back when it was formed, and continued to be popular throughout the 2000s. However, recently it may have lost its charm because many locations have shut down over the years.

Jet’s America, better known as Jet’s Pizza, is a pizza chain based in Sterling Heights, MI. From the name, you may have guessed that it operates only in the US. Most of its restaurants are huddled in the state of Michigan. Their serving tactics are similar to those of Sbarro. You can only purchase pizza slices from Jet’s Pizza, but they don’t mind giving out the entire thing too.

Eugene and John Jetts first brought Jet’s Pizza into the restaurant industry in 1978. However, the company, Jet’s America, was born in 1992 after they launched more locations in the vicinity. Apart from pizza, each of their outlets offers sandwiches, chicken items, sides, salads, and desserts. They currently have over 400 outlets in 19 states throughout the US.

Headquartered in Irving, TX, Cicis Pizza is different from Little Caesars in the sense that it is a buffet restaurant, not a fast food outlet. Fresh pizzas are offered in a buffet-style arrangement, which the customers can take and eat in the outlet. Cicis was established in 1985 by Joe Croce and Mike Cole, and it was initially called Cici’s with the apostrophe.

In the early stages, Cicis Pizza only sold pizzas, but it expanded its offering at the turn of the millennium to pasta, salads, etc. Did you know that it once had more than 500 restaurants throughout the US? However, due to their buffet business model, the COVID-19 pandemic hit them hard, and they had to close many of their locations. The total count today is around 300.

Little Caesars biggest competitor is Domino’s Pizza. It is THE largest pizza chain not only in the US but in the world as well. The two giants have been competing against each other for over 60 years now, but Domino’s has almost always stayed ahead of Little Caesars. To be fair, Little Caesars is not as popular as Domino’s in many other parts of the globe, so you can always depend on the latter to be present in a place Little Caesars isn’t. 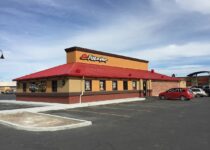